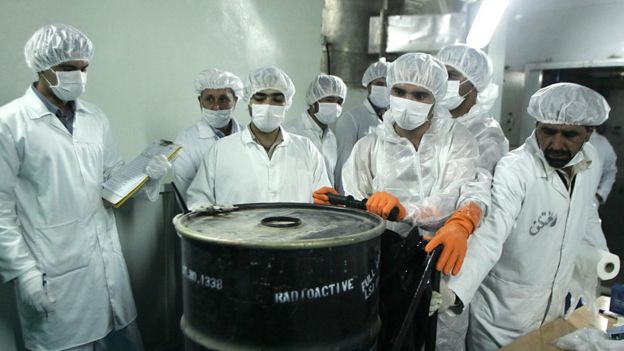 On Tuesday, Iran is set to inform the United Nations’ nuclear body that it will begin the process of increasing its capacity to produce uranium hexafluoride, a key ingredient for enriching uranium.

It is not yet known whether countries in the European Union will keep afloat the deal.

The process will begin when the Iranian Atomic Energy Organisation hands over a letter to the Vienna-based UN’s International Atomic Energy Agency (IAEA), informing it of its decision vis-a-vis uranium hexafluoride.

“Iran will announce that the process of increasing the capacity to produce… UF6 [uranium hexafluoride]… will start on Tuesday,” said Behrouz Kamalvandi, a spokesman for Iran’s nuclear agency.

He went on to add, “The leader [Ayatollah Khamenei] meant that we should accelerate some process… linked to our nuclear work capacity to move forward faster in case needed”.

However, the 2015 landmark deal could be salvaged. Ayatollah Khamenei has laid out several conditions for Iran to stay within the agreed framework, which includes protection of Iranian oil sales and safeguarding of trade.

According to Iranian authorities, if the deal fails, it has several options including enrichment of its uranium to 20% purity; the 2015 deal limited Iran to 3.67% purity.

Iran has insisted that its pursuit of nuclear energy is entirely peaceful. More importantly its compliance with the 2015 deal has been verified by the IAEA.

According to Ayatollah Khamenei if France, Germany and the UK are unable to meet demands, Iran would resume its enrichment of uranium.

“The Islamic Republic cannot deal with a government that easily violates an international treaty, withdraws its signature and in a theatrical show brags about its withdrawal on television,” said Ayatollah Khamenei in reference to the United States.

A small step towards a greener energy security in Lebanon