According to the president of Saudi Arabia’s Emirates airline, the combination of rising fuel prices and a stronger dollar has resulted in the airline operator receiving a “double whammy”.

“We have very strong summer bookings at higher prices,” said Tim Clark on the sidelines of an aviation industry meeting in Sydney. He went on to add, the Emirates is monitoring trends and checking whether higher ticket prices was leading to a drop in demand.

On Monday, global airlines body, IATA, had stated it has downgraded its profit forecast for the industry citing increased oil and labor costs. However, it also said passenger yields, a proxy for air fares, were also expected to rise by 3.2% in 2018.

IATA had also warned that that higher airfares could lead to reduced number of passengers.

When asked whether this point is approaching or whether this has been reached, Clark responded with a no; he said Emirates had managed to raise ticket prices for the summer without it effecting bookings.

“The velocity of growth (in bookings) exceeds what we had seen last year,” said Clark.

According to executives from the industry, in order to battle higher oil prices, airlines are resorting to tactics which include, decreasing capacity, raising fares, locking in fuel hedges, and retiring older jets.

Clark also mentioned that Emirates’ business in the United States is seeing positive growth. Its business was hit after being hit by restrictions on electronics devices, last year.

Clark also mentioned, that “Fifth Freedom” routes, which allow airlines to fly planes between foreign countries as a part of services to and from its home country, was central to its business.

Emirates is expected to make a decision soon on the engines for its latest order of A380 super jumbos. The planes are due for delivery from 2020.

Although engines from General Electric and Pratt & Whitney Engine Alliance powers most of the Emirates A380s, it lost out to Rolls-Royce on its latest deliveries. 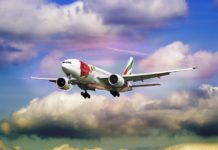