The oil price hike is mostly behind the modest growth rebound which has proven to be beneficial to the local exporters of oil while the pressure was felt by the oil importers. According to a new report from the World Bank, the growth projection in the MENA region, in 2018 is likely to see a rebound of two percent in average, while in 2017, the respective average figure was at 1.4%.

Moreover, the growth rebound is an indication towards the efforts that went into the “modest reforms” and to bring forth “stabilization” in some of the countries in MENA region. Nevertheless, the growth wave moving slowly will fail to match the job creations to cope with the “large youth population” of the region. Therefore, new growth drivers are needed in the picture to satisfy the job requirements.

“A New Economy for the Middle East and North Africa” is the latest version of the MENA Economic Monitor’s bi-annual edition, which chalks out a roadmap for tapping onto the “enormous potential” of the well educated youth of the region and the same can be achieve by turning towards “new digital economy”. To support the growth rebound and to arrive at the desired goal, there needs to be a broader and bolder spectrum of reforms, while “critical investments in digital infrastructure” cannot be overlooked either.

Additionally, the education system in the region will have to reorient itself towards “science and technology”, besides creating “modern telecommunications and payments systems” as well as establishing a “private-sector driven economy” that needs to be governed by regulations which promotes innovation.

In the words of the vice president at World Bank’s Middle East and North Africa Region, Ferid Belhaj: “Far too many of the region’s young men and women are unemployed. This challenge will continue to grow unless it is turned into an opportunity. The current growth momentum is a chance to increase the speed and ambition of reforms. The focus should be on building a modern economy that leverages new technology and is driven by the energy and innovation of young people.”

The report dealing with the growth rebound in MENA region informs that the foundation for creating a digital economy in the region is already available as one sees “new digital and mobile technologies” are being widely adopted by the youth. However, regulatory hurdles and the absence of “key infrastructure” are delaying the launch of new enterprise through smart devices that are used for “accessing social media”.

Moreover, the same report also “identifies ‘green shoots’ of the new, digital economy”, like “ride-hailing app Careem”, which began as a start-up and went on to create “thousands of jobs across MENA and beyond”. Now the challenge that lies ahead is to create the favourable growth conditions for “these green shoots”. The main author of the above mentioned report, Rabah Arezki, who is also the World Bank Chief Economist of MENA, said: “Countries in the region possess all the ingredients they need to leapfrog into the digital future. The key is making sure young people are taught the skills needed for the new economy, have access to tools such as digital payments, and that obstacles to innovation are removed. It will require governments acting on many fronts, and pulling multiple policy levers, but the rewards in growth and jobs will be more than worth it.”

Recommending various steps following the growth rebound, the report advises on marking goals like “achieving parity with advanced economies in information and communications technology by 2022”, for “bold objectives” will bring citizens, governments and private sectors together whereby fulfilling a much needed condition to “achieve the ambitious agenda”.

The above mentioned initiative could be a transformative agent for the MENA economies, whereby ensuring job opportunities to millions of youth in MENA. The wake of growth rebound, the report predicts that there will be a continuous growth stream improving in a modest manner to “an average of 2.8% by the end of 2020”.

However, amid the positive expectations of the MENA oil exporters of benefitting from the oil prices, a risk seems to broil of worsening and dampening the region’s growth due to the presiding instability. Bringing in a reformation in the domestic picture will assure a revenue growth besides containing “public spending” whereby contributing to the “growth in oil exporters”. 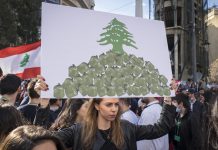