Holy month of Ramadan comes to an end with some deadly wishes between Yemen and Saudi Arabia. Saudi air defenses confirmed that a ballistic missile fired from pro-Iranian rebel-held territory in Yemen was intercepted on Thursday. The missile was intercepted over Khamis Mushait in the Saudi Kingdom’s south.

No casualties were reported so far, according to the official statement released by the Saudi Press Agency. But Iran-backed rebels claimed that their missile did hit a Saudi air base, as they often do after such an operation. Last Sunday, Saudi air defenses already claimed they intercepted a ballistic missile over the southern city of Jizan, with no casualties reported.

On the ground, Yemeni pro-government and pro-Iran forces are locked in heavy fighting with rebels as they press a Saudi and UAE-backed offensive to retake the key aid hub of Hodeida. Saudi Arabia, the United Arab Emirates and other Arab allies intervened in Yemen back in 2015 to restore the internationally recognized government to power after the Huthis rebels ousted it from swathes of the country including the capital Sanaa. Iran and Saudi Arabia simply use Yemen’s factions as proxies since 2015.

Since June’s beginning, Saudi Arabia and Yemeni rebels hit back. On June 1, Yemeni forces declared having shot down a Saudi helicopter and threatened UAE that Abu Dhabi was at missile range. On June 4, a ship used by the United Nation’s World Food Programme was attacked next to Al-Hudaydah’s port after having delivered its shipment. Four days later, heavy fighting took place in al-Durayhmi and Bayt al-Faqih, in the same region of Al-Hudaydah. The two cities under siege and their 250,000 inhabitants were under threat. Finally, on June 10, the United Nations withdrawn from the region. And on June 12, humanitarian aid was aimed, as a Doctors Without Borders building was hit by a Saudi airstrike. 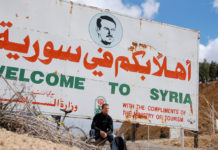