Energy hunger presides over Africa, as the World Economic Forum reports that only “24pc of sub-Saharan Africans” have electricity access, while the capacity to generate energy for the “entire African continent”, leaving only South Africa, comes to “only 28 Gigawatts”.

Currently, countries in Africa are facing “low energy consumption and access” issue; as a result there is “54 days of power outage” annually. As per the projection of WEF, the “demand for energy solutions” is likely to go up along with the rising “population, urbanization and economic productivity”.

At this juncture, the innovation of sustainable waste management for “a struggling sector” is gaining fast popularity with the leaders of Africa along with the private and public sectors. Over the years, African continents has been plagued with the “shortage of sustainable energy” which has embedded itself to the country’s socio-economic fabric, whereby tagging the region as “the dark continent”.

The immediate need for energy in Africa is a catalyst for the “growth of the waste-to-energy industry globally”. In fact, Sweden has already presented “stellar example in this field for turning waste issues into solutions. Adeniyi Makanjuola, a director of “Visionscape Group” informs:
“The country began its waste management revolution in the 1980s with the development of incineration plants, as disposal sites became harder to find and leachate pollutants became a significant problem. Today, the country incinerates 50pc of its waste to generate energy, and recycles about 49pc, leaving only 1pc to go into the landfill”.

Following the landslide involving a dumpyard in March 2017, which claimed the life of more than hundred people, Ethiopia turned into the first country of Africa to introduce “a full waste-to-energy plant in Addis Ababa”. The said plant has the capacity to process “1400 tons of waste” daily, while plans are there to “supply 30pc of the city’s electricity requirement” through this establishment.

The pant uses waste dumped at the “Koshe dumpsite”, while the facility is receives financial support from a “public-private partnership” which takes place “Ethiopian government and a consortium of investors from Singapore, China, and Denmark”. Furthermore, Visionscape provides waste management solutions in the area, which is going to offer “a lasting solution” for addressing “two significant challenges” faced by the emerging market sectors in Africa, namely “waste management and sustainable energy”.

Visionscape operates a “closed loop system” infused with its “sustainable business model” it brings down “carbon footprint” in various market-sectors by collecting waste, promoting recycling and “reusing 90pc of the materials manufactured”. In fact, Visionscape is currently developing the infrastructure for an “integrated waste management system” in Africa and is also building the “first engineered sanitary landfill/Eco-park in West Africa”.

The model of Visionscape’s Eco-park will be a hub to harvest and share knowledge and “global best practices” in Africa, whereby collecting waste from agricultural sector to “industrial slurry”. Eco-park will receive its electricity supply from the plant, while the excess energy produced will be fed into the grid to be “distributed to surrounding communities”. 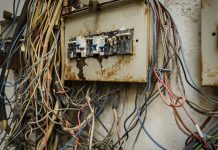