Things may change between Sudan and Russia. Or not. During a visit to Moscow, Sudanese Foreign Minister Mariam al-Mahdi had said, lawmakers from his country would consider an agreement brokered by Sudan’s former president Omar al-Bashir to establish a Russian naval base in the country.

In 2017, Omar al-Bashir had agreed to establish a Russian naval base on the Red Sea cost in Sudan. But in 2019, after Bashir was overthrown Sudan has moved closer to the United States.

Although there has not been any formal press release from the Sudanese side, Moscow has said, it had signed a 25-year agreement with Khartoum in December 2020 to build and operate a naval base in Sudan.

“The process of ratifying any international agreement requires passing through the Legislative Council, and in the absence of the Council currently, this role is being exercised by approving the agreement by both houses: the Sovereign Council and the Cabinet,” explained Sudanese Minister of Foreign Affairs Maryam al-Sadiq.

This is the process for all current international agreements, not just agreements with Russia, said Sadiq.

Earlier last month, a top Sudanese military official said, Khartoum was reviewing the agreement and that some clauses were “somewhat harmful”.

In a statement to the Blue Nile TV channel Sudan’s Chief of General Staff Muhammad Othman al-Hussein said, “some of the document’s provisions entail certain harm for Sudan” and went on to remind viewers that the deal has yet to be approved by Sudan’s legislature, thus the agreement is not legally binding. He also denied speculation on Sudan’s decision to shelve the deal citing US pressure.

During a press conference with her Russian counterpart Sergei Lavrov, Mahdi was non-committal saying the legislature will study the agreement.

“We now have a government that is accountable to a new legislative mechanism. The Sudanese legislature will discuss and consider this document,” said Mahdi.

Incidentally, Sudan’s legislature has yet to be set up. Since August 2019, Khartoum is being led by a transitional administration that is trying to end the country’s international isolation.

The agreement allows Russia to station up to four ships at the base, including nuclear-powered vessels, along with up to 300 military and civilian personnel. The base will also be used for repairing ships, resupplying Russian military ships, as well as be a base for rest for naval crews.

Lawmakers will ultimately evaluate whether the agreement is a “benefit to Sudan itself and the strategic goals pursued by Russia and Sudan,” said Mahdi.

Due to crippling economic sanctions imposed by Washington against the ousted Administration of President Bashir, Sudan was militarily dependent on Russia. However last year, Washington has removed Khartoum from its economic blacklist.

As a result of this shift in U.S. policy, Washington’s influence in Sudan has significantly expanded after the U.S. State Department removed Khartoum from its list of state sponsors of terrorism.

This move took place in the aftermath of a coup against former Sudanese President Omar al-Bashir, who had previously been seen as being close to Moscow; before he was ousted, he had made moves of rapprochement with the Gulf Cooperation Council (GCC) resulting in Sudan dispatching troops to assist the GCC’s war in Yemen. This helped Khartoum gradually repair its relations with Washington.

Sudan is however continuing its economic relations with Russia. When asked to respond to questions on the future of Russian business in Sudan, Sadiq said “Russian companies will continue to work in the fields in which they operate. We are promoting the recruitment of more Russian companies, banks and investments to Sudan, because this establishes common interests between the two countries.”

Earlier last month, Maria Zakharova, the official spokesperson for the Russian Foreign Ministry said, Russian logistical support center in Sudan will contribute to the development of military-technical cooperation between the two countries; she also stressed that Russia is interested in strengthening its partnership with Sudan.

She went on to note, under the conditions of the transitional period in Sudan, there is no legislative body with the necessary powers to ratify the agreement, therefore certain changes must be made to the agreement before it comes into effect.

The uncertainty surround its potential naval base in Sudan is detrimental to its regional interests, especially taking into account the strategic contours of the move to engage and influence the international Muslim community. The potential naval base also has economic outlook given that the planned base’s location in Port Sudan is the terminal point of China’s Belt and Road initiative which stretches across the Sahel.

If Sudan gives in to U.S. pressure and if Russia’s plans of having a naval presence in Sudan is scuttled then Moscow is likely to consider a regional replacement in the breakaway Somali region of Somaliland.

According to unconfirmed reports dating back to early 2018, Russia planned on establishing a naval base in the Djibouti-bordering town of Zeila. If Moscow were to fallback to this option, it would be somewhat risky for its soft power, since by doing so Moscow would essentially be extending its de facto support for the separatist region’s claims of sovereignty. This will be in contrast to its principled support for international law, which recognizes Somaliland as an integral part of the Federal Republic of Somalia; further, it will also sow the seeds of distrust between Moscow and Mogadishu.

Incidentally, Abu Dhabi has a naval base in Somalia and relied on it in its war in Yemen.

As noted by Oxford scholar Dr. Samuel Ramani, “the UAE is reorienting its Red Sea strategy away from direct military intervention and toward a synthesis of economic investment and remote power projection.” Which means “the Emirates’ regional military engagement has successfully enabled the country’s policy to evolve in the economic direction after opening up the requisite doors for this to happen with Somaliland’s leadership.”

Moscow could follow in the UAE’s footsteps. If Moscow were to clinch a comprehensive regional partnership with the UAE, it would enhance its position over the entire Horn of Africa. Such a move could in fact be the next natural step following their emerging partnership in the last few years with the two countries coordinating closely in Syria midst expanding military cooperation.

Incidentally, the nature of UAE’s independent foreign policy is in contrast with Washington’s efforts to contain Moscow. This confluence of interests between the two countries is a driving factor in their new era of relations.

Furthermore, Abu Dhabi is a major player in Ethiopia – Africa’s second most populous state. With the Emirates planning to build a corridor between Ethiopia and Somaliland terminating in Berbera, it could, in theory, be utilized by Moscow to expand its trade with Ethiopia – a country which was witnessing some of the world’s fastest economic growth before the Coronavirus-induced COVID-19 pandemic and the Tigray war.

In the event Khartoum agrees to respect its non-binding agreement and agrees to host a naval base, its importance is likely to be diminished since it may no longer serve as Moscow’s gateway to Ethiopia as previously expected following the re-eruption of last year’s border conflict in the midst of Addis Ababa’s military intervention in Tigray Province; it only makes sense for Russia to look for an alternative naval presence in Africa.

With elections in Sudan planed for 2022, the chessboard could change once again. Only a wizard could predict exactly what will happen then. 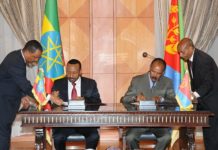