Wind farms have now been added to Lebanon’s basket of renewable energy sources. Earlier this week, Cesar Abi Khalil, Lebanon’s caretaker Energy Minister disclosed in the presence of FPM MP Hikmat Dib and director general of the state-owned Electricite du Liban, that his ministry had signed an agreement to purchase wind farm generated electricity from a private sector firm. Once the wind farms are built, electricity generated by them will be fed to the national grid.

“The project was launched in September 2012 and then a ministerial committee was formed in 2014 headed by the prime minister, including representatives of the Energy and Water, Finance, Environment, Justice Ministries and EDL”.

The wind farms project, consisting of 3 stages – declaration of Intent, tender and negotiations, is an achievement, he said while adding that his ministry had brought in several consultants who helped in the pricing of the electricity price from the project, which comes to 10.75 cents per kilowatts. The report was submitted the Cabinet, which agreed to this pricing scheme.

“We can get better terms and the international financial institutions have asked for some amendments to the contracts signed on Feb. 1 to secure better financing conditions. We have stipulated that any amendment to the contract should benefit the EDL, and after we took the decision to amend the contract, the price was reduced to 10.45 cents in the first three years, to be reduced again to 9.6 for the remaining 17 years of the contract,” said Abi Khalil.

He went on to add, adverse weather conditions had prevented the Turkish power barge, which houses the wind farms which produce 200MW of electricity, from docking in Jiyyeh, a southern coastal town, on Monday. Incidentally, a second power barge, which is also owned and operated by Karadeniz Holding, a Turkish company, has been moored there since 2013.

Dismissing reports by the state-run National News Agency that the power barge was prevented from docking by “concerned authorities” since it did not have a permit, Abi Khalil clarified at a news conference that “the problem … was caused by the weather and high wind speed … the captain of the ship told us there was danger [posed to the barge].”

The arrival of the wind farms laden barge carrying sparked a row among Jiyyeh’s residents, with the city’s Mayor George Kazzi saying he was confused since the dock was to barge at Zahrani.

“We were surprised today when we saw this huge ship heading toward us. They told us it would be placed in Zahrani,” said George Kazzi. 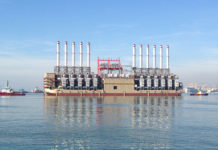 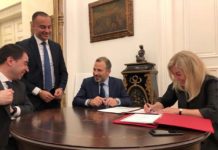 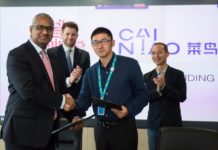