Targeting a burgeoning tech sector in Lebanon, this year’s SmartEx exhibition saw the participation of scores of companies who showcased their innovations and highlighting growing opportunities in the industry.

The four-day event saw experts fielding questions from consumers which shed light on doubts and nagging issues across a wide spectrum in the industry ranging from retail, information, automation, telecommunication and security.

This was the second year of the SmartEx exhibition, which spawned from a similar event in Saudi Arabia and then spread throughout the region.

The industry event underscores Lebanon’s growing potential as a tech hub and follows in the wake of the CEDRE Conference in which grants and loans worth $11 billion were disbursed so as to rehabilitate and rebuild a vibrant and dependable infrastructure in Lebanon.

Lebanon has the potential to develop into a genuine tech hub in the region.

The SmartEx exhibition was opened by Telecommunications Minister Jamal Jarrah highlighting the accomplishments of the country’s entrepreneurs who have been able to hold their ground in the tough global startup space.

“Our youths have shown distinction on the global stage,” said Jamal.

Underscoring the purpose of the SmartEx exhibition, the managing director of MICE (Meetings, Incentives, Conferences, and Exhibitions), Jason Rizk stated, “We want to reposition Lebanon as a tech and business tourism hub, and as a tech platform in the Middle East.”

He went on to add, “We have a very talented workforce. A lot of guys are going abroad. When they go abroad they shine – whether it’s in startup competitions or in businesses. I don’t want them to go abroad anymore. Lebanon is the right place for them.”

Echoing similar thoughts, Soft Flow’s Izzat Jaroudi, a sales account manager at the IT solutions and services company said, “We need to go outside Lebanon to go back to Lebanon. We’re always managers. But in our country we can’t be that because no one believes in us. I don’t want to leave.”

In the past, weak infrastructure including power cuts, lack of good job opportunities and proper waste disposal systems have led many of Lebanon’s talented professionals to move abroad to greener pastures. The SmartEx exhibition is aimed at fostering growth in the country.

It is about time that Lebanon’s tech sector is taken more seriously and not just as a niche industry but rather as a strategic and systemic instrument that plays an integral part across industries and sectors.

The SmartEx exhibition marks Lebanon’s growth potential in technology and is backed up by data from the country’s Information and Computer Technology sector which saw an astounding growth of 9.7% in 2017, according to IDAL.

The tech sector was among Lebanon’s fastest-growing industries. Much of this growth can be attributed to Circular 331, a central bank-guaranteed fund that targets Lebanese startups.

According to Sami Abou Saab, CEO of Beirut-based Speed, who incidentally will be instrumental in the closing ceremony of the SmartEx exhibition by holding a startup competition, “I believe this is the time where people should double down on their support to the tech industry and especially innovation”.

“We need more awareness of IT in Lebanon. We’re still small group of companies, and we need more investment and encouragement. It shouldn’t be a small sector. Companies should use more technology as added value in their business,” said Patrick Raad, CEO of Techno Vision, a GPS tracking system who participated in the SmartEx exhibition.

“The world is fast changing, and we already had expertise in printing, so 3-D was an extension of that,” said MarieJoe Raidy, creative director at Raidy Printing Group which holds free monthly workshops on 3-D printing. She found Lebanese to be the fastest adopters in the region. 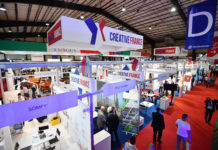