Ministers from OPEC countries have arrived in Vienna in order to decide whether to reverse their landmark pact to curb oil production so as to bring down the excess in the global oil pool.

The upcoming meeting of OPEC and non-OPEC energy ministers scheduled for June 22-23 are likely to be contentious with resistance, to an increase in oil production, mainly led by Iran.

Although Saudi Arabia, Iran’s rival, cheered the U.S. move to exit the 2015 nuclear deal, it is under pressure to keep oil prices low due to mid-term elections in November in the United States.

According to Iranian oil minister Bijan Namdar Zanganeh, Trump is partly to blame for higher oil prices and for politicizing OPEC.

Zanganeh said Trump had “created difficulty for the oil market” by imposing sanctions on Iran and Venezuela. “And now he expects OPEC to change something for better prices”.

“This is not fair… OPEC is not part of the Department of Energy of the United States,” said Zanganeh in reference to the U.S. attempt at controlling OPEC’s oil production.

In April 2018, Khaled al-Faleh, Saudi Arabia’s Energy Minister had voiced support for a cut in production saying “the market had the capacity to absorb higher prices.” But with Trump disagreeing with his assessment, he tweeted “Oil prices are too high, OPEC is at it again. Not good!” tweeted al-Faleh last week.

According to observers, Trump is pressuring Saudi Arabia to boost its oil production so as to offset the expected drop in Iranian production.

Iran is not the lone voice against a hike in production, Iraq and Venezuela are also objecting.

“They stand to lose if production is increased,” said Bjarne Schieldrop, an analyst with SEB bank.

However, on June 20, Iranian Oil Minister Bijan Zanganeh said, OPEC members who had earlier cut down on their oil production in recent months, could boost their output to higher agreed quotas, underscoring its willingness to a compromise solution.

Mohammad Barkindo, OPEC’s Secretary General said, he was confident that a deal can be reached during the June 22 negotiations. 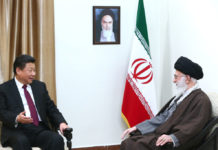 Iran-China relations likely to expand in near future