At present, Jordan is banking on Gulf States, rich in oil reserves, for creating a “multi-billion dollar” gulf aid package, for the former to navigate itself through the economic crisis. The said coalition of Gulf countries is led by Saudi Arabia, while the Jordan economic crisis has seen “rare street protests over austerity plans”.

According to a statement from the palace, the King Abdullah has left to attend a summit which has been called by Saudi Arabia’s King Salman, whereby inviting various leaders on board from the UAE as well Kuwait. The agenda of the meeting held up to the discussion to help Jordan economic crisis sparking street protests.

Officials were hopeful for receiving an approval of “a major package” similar to 2011’s “$5 billion” fund received by Jordan from “Gulf monarchies”, with the aim to bridle the pro-democratic turbulence that brewed around the region.

The shade of the funds aimed at “developments projects” urged the growth of Jordan’s “aid-dependent economy”. Reuters was reported by an official, “who requested anonymity”, that a deposit of “$11.5 billion” would create an impact significant enough to ease the pressures exerted on the “deficit-ridden budget”, where “spending goes mainly to covers public salaries” while reserves that exit are at their dwindling end.

As mentioned above, there has been past incidents when Jordan leaned towards foreign support to finance nearly 50% of the budget deficiency. According to another official, the financial help coming from “Saudi Arabia, Kuwait and the United Arab Emirates” which was used to build hospitals, highways and old age facilities were indirect helps to the country’s economy which was spared from “large capital spending”.

Last week, thousands of citizens from Jordan expressed their “hurt” feelings by “peaceful” protesting on the streets against the “IMF mandated economic policies” issued by the government. Following the rare public protests, King Salman Abdullah sacked the government and appointed a “new prime minister”, who pledged to “reverse plans” in order to avoid steep hike in taxes.

According to a statement which came from the royal palace, the King said that Jordan had Riyadh’s support “in all circumstances”. According to the diplomats of the west, the civil unrest in Jordan cast a spell of fear among the gulf countries, as protests in Jordan, the being a “the staunch U.S. ally” could compromise their respective security.

Jordan’s economic woes seem to have “worsened” as the grants from gulf countries have ended, while the country is left to shoulder the burden of supporting “thousands of Syrian refugees”, says officials.

Jordan plays a key role in maintaining “geopolitical stability in the Middle East”. As a result, the country is among the “highest per capita recipients of foreign aid in the world”, reveals USAID figures.

However, according to Reuters reports, on Monday, 11 June 2018, the three countries involved in the summit, namely Saudi Arabia, Kuwait and the United Arab Emirates, have issued a “joint statement” to reveal that Jordan has been granted a “$2.5 billion” aid package. While, Reuters added further that:
“The package includes a deposit in Jordan’s central bank, guarantees to the World Bank, annual budget support for five years, and development projects, the statement carried by the Saudi state news agency”. 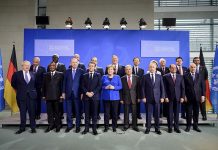 Libya: The economic potential of a failed state