The electricity scene in Lebanon is notorious for long power cuts leaving households, retailers, and industries in near-permanent anemia. Since decades chronic power shortages in Lebanon have been routine. Erratic power supplies have placed even critical services including hospitals and essential services, in near perpetual crisis modes.

Increasing demand for electricity, typically met to a degree by private operators who provide electricity generated from diesel powered generators, coupled with an unprecedented crash of the national currency, have made the electricity crisis even more severe.

This crippling energy crisis, has been made worse by Lebanon’s dependency on imported fuels. Western sanctions on Russia have blocked its capacity to export energy resulting in runaway energy prices; this has made renewable energy sources very attractive.

Cause of the power crisis

During power outages, Lebanese businesses and households rely on subscription-based access to electricity from private diesel generator operators. As a result they end up paying a lot more per kilowatt hour compared to official electricity tariffs. The severity of power outages varies by region, which is another component to high input costs for business.

In 2015, Lebanon’s capital Beirut had, on average, 21 hours of electricity per day, cities that are further away, such as Bekaa, had on average just 12 hours of electricity per day. For businesses, the costs of operations shoot up not from direct costs as a result of bills from private generator operators, but also from indirect costs including costs incurred for disruption of economic activity or from increase in air pollution.

As for Lebanon’s state-owned electricity company, Electricité du Liban (EDL), it is not only forced to incur high production costs stemming from imported fossil fuels, but also from forced to artificially keep prices low in order to make it affordable for the masses and thus operates at a loss.

EDL also faces issues such as electricity theft which erodes its meagre revenues and adds to its losses. Since 1992, EDL has accumulated a whopping $40 billion in debt, equivalent to 43% of government debt.
The loss-making electricity industry adds to Lebanon’s debt-ridden economy. In fact, over the last decades EDL has significantly contributed to the government’s debt, adding to its financial woes.

With Lebanon dependent on imported fuel for its electricity, soaring energy prices following the war in Ukraine, have made it impossible for the government to subsidize fuel, which has led to not only longer power outages but longer queues at petrol stations.

In the summer 2021, the entire power industry collapsed, plunging the entire country into darkness. The army was called in to intervene to provide fuel.

Solar to the rescue

The power crisis has a silver lining, representing a window of opportunity for the industry to adopt a mix of alternative energy sources including solar. The “unpredictability” of Lebanon’s energy sector is pushing residents towards adopting solar energy.

Retail and wholesale dealers of solar power systems are seeing a robust demand for this solution from not only small and medium companies but from citizens as well.

In recent months, sales of solar panels and batteries have jumped by 200% from a year ago, with most orders coming from small towns and rural areas. Prices of a solar system with batteries range from $3,000 to $13,500, depending on the number of panels and size of the batteries. Wholesalers and retailers are offering solar power systems from 5 amps up to 100 amps.

While currently the price of a solar system with batteries are outside the reach of the common household, it has takers who are willing to shell out a premium for guaranteed long hours of electricity. In fact, they think it’s a good hedge against power outages since they expect the power scene in the country to worsen in the near future, said a dealer.

Case in point: Emilio Matar, a resident of Lebanon has installed solar panels at his parent’s home near Beirut in order to ensure a reliable electricity supply independent from local suppliers who hold a monopoly on power generators.

In Arsal, close to the Syrian border, a Scottish and German NGO have installed solar panels to ensure continuance access to clean water. This is available for access to local Lebanese as well as for Syrian refugees.
NGOs and UN agencies are also upgrading power systems at schools and hospitals in order to avoid a humanitarian crisis.

This demand has created a cottage industry with more than a dozen dealers now offering a wide range of solar power systems and batteries in the market. Batteries can be charged either by directly by solar panels or from electricity from EDL.

In mid-March, in a cabinet meeting, Lebanon approved a plan to restructure its electricity sector. This is a key factor for donors including the World Bank, to extend funding for regional deals which could alleviate its power supply issues plaguing its industries. And mid-May, Energy and Water Minister Walid Fayad authorized 11 companies to produce clean electricity through renewable energy plants (3 in the Beqaa Valley, 3 others in the North, 3 in the South and 2 in the mountains).

The reform plan includes the creation of an electricity regulatory authority as well as a revised version of an earlier plan to reduce electricity subsidies resulting in increased power tariffs. The plan envisaged $3.5 billion in sunken costs in order to secure power access for 24 hours across the country by 2026.

This assumes significance since Lebanon has not had access to electricity for the entire day since the 1975-90 civil war. Periodic cash infusions to EDL have only added to its massive public debt.

With Lebanon receiving 300 days of sunshine in the year, the potential for solar power has immense potential to provide a basic level of energy security for the country. Rather than go for a wholesale replacement of fossil fuel with solar power system, its adoption in municipalities where there are existing generators could significantly alleviate power shortages faced by the Lebanese.

A decentralized community model with each neighborhood, city, or town having its own solar power system could potentially bypass vested interests and corruption that have dominated Lebanon’s national electricity supply.
Such a distributed systems, such as hybrid solar-diesel microgrids, could ensure “a fair, equitable, and more reliable electricity provision,” opined Jessica Obeid, an independent energy consultant. 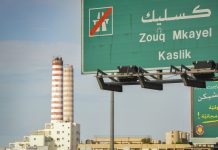 Fixing electricity in Lebanon: the clock is ticking